Who the firkin hell is…Tim Goulding?

“What the firkin hell is this?” I hear you ask. Well, let me explain…

‘Who the firkin hell is…?’ is a weekly glimpse into the lives of individuals that work (some tirelessly) to bring the Brisbane public the very best in good beer. Some are brewers, some own/work in your favourite bar, some are retailers and some are brewery reps.

If you don’t know what a firkin is then the whole beer-related, play-on-words title will be lost on you right?! Fear not – click here for more information on firkins.

Today is the eve of The Scratch Bar’s second annual Weekend of Darkness and who better to feature in this slot than the emperor of dark himself…resident Scratchy – Tim Goulding.

Over to you Tim… 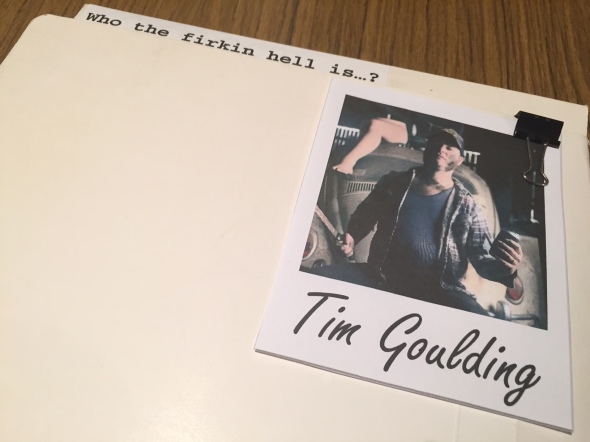 What is your day job?

General manager at The Scratch, Brewer for Brewtal Brewers and Worlds Greatest Dad.

How long have you been doing that for?

The Scratch for 3.8 years, Brewtal for around 18 months and Worlds Greatest Dad 4.87 years.

What were you up to before that?

What is the best part about your job?

Getting to work with an awesome bunch of guys and girls that make The Good Family Scratch, brewing beer that I’m passionate about and hanging with Howes.

What was your ‘epiphany beer’? The beer that made you ‘turn your back on cack’?

Tough one. Probably Grand Ridge’s Black and Tan. I grew up with non-beer drinking parents so I’ve made my own journey so to speak, but I’ve always been drawn to the dark beers.

Have you ever had a beer that has totally blown you away? If so, what was it?

What is your preferred style of beer and why?

I love the huge flavours, the complexity and sharing a big bottle with friends. From a brewing perspective, they are hard to get right. I enjoy the challenge of creating a balanced dark monster.

If I gave you $100 in cash right now with the only proviso being that you had to spend it on beer, what would you indulge in?

Hmm Boatrocker’s Banshee Barley Wine and Ramjet Imperial Stout. Both are barrel aged and both so darn delicious. I’d probably buy two bottles of each.

I have a large hoard of empty beer bottles and another of beer glassware. Do you have any beer-related vices?

Probably talking too much about beer.

In your opinion, where’s the best place to grab a decent beer in Brisbane?

The Scratch of course…but I really enjoy Brewski.

What is so good about it there?

Brewski always get the ridiculous beers and have plenty of stouts for my soul. It has a fun atmosphere.

Cans are fun but not enough imperial stouts come in cans….so bottles.

What are your hopes for the future of Brisbane’s craft beer industry?

Keeping the community strong and the love between bars/breweries/reps etc. Local fresh craft beer being the norm in pubs and bars across the city.

This isn’t a job interview but where do you see yourself in five years time?

What would your response be if somebody stopped you in the street and asked you what your favourite beer blog is?

Thanks to Tim for taking the time out of his three job routine. No doubt you’ll find him wallowing in all of his dark beer glory at The Scratch during the Weekend of Darkness over the next few days. Do yourself a favour and embrace the dark side – go pay him a visit. He’s way not as scary as the photo above suggests!

Previous ‘Who the firkin hell is…?’ appearances can be found by clicking here.

Category: Brisbane, Pubs/Bars, Who the firkin hell is...? | Tags: Brisbane, The Scratch, Weekend Of Darkness

Who the firkin hell is…Ian Watson? »
« The Return of the Beer InCider Experience (plus EXCLUSIVE announcement)