Well, that’s Brewsvegas gone for this year. What a remarkable week!

The first ever week-long celebration of beers, bars and breweries in Brisbane could have been a failure but the small team of bar managers that spearheaded the overall festival had kept things fairly shmick that everything ran very smoothly…except for a few hiccups along the way but nothing that anybody really noticed or gave a shit about.

Personally, I had a mini agenda of my own for the week. Not only had I intended to attend 19 events but I made it my purpose to get to as many new places as possible – bars that I’d never visited before…as well as trying as many new beers as possible too but that’s a given right?!

I managed to get to 19 events although they were slightly different to the 19 that I’d planned. Some I’d decided against last-minute whilst others I abandoned due to overcrowding and so went and did something else instead.

Out of the 43 participating venues, I got to 15 of them. Six of which I’d never been to before Brewsvegas. These were The Bearded Lady, Bosc, Cartel Bar, Hoo Ha Bar, Plenty and Statler & Waldorf. Mission accomplished. In terms of beer consumption, well maybe you should look away now if you’re reading this Mrs 250 Beers. My beer intake from the beginning to the end of Brewsvegas totalled 89 with 52 of them being unique check-ins on Untappd. This is quite alarming considering it equates to an average of more than ten beers per day over seven days. So, I’ll be staying off the beer for a while as my liver and pocket both take a breather. 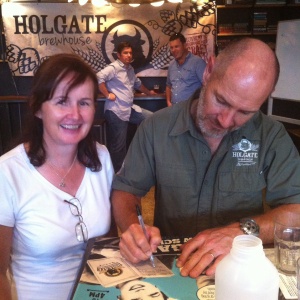 Getting back to the week itself rather than prattling on about numbers, I was amazed at the turn-out at some events. Three events spring to mind. Firstly, the Holgate Brew School at Archive. It was starting at 11am on a Tuesday. What do you reckon? Maybe 15 attendees? Nope, there were more than 40 ‘pupils’ in that ‘classroom’ to watch as Paul Holgate brewed a Road Trip IPA right there in front of us. Another event that bulged beyond belief was the Ca-beer-et & Cans at The Scratch. It’s not a big place by any stretch of the imagination but they could have filled it more than twice over by all accounts. Lastly was Holidaze with Stone & Wood at Plenty. The decision to go to this event was spur of the moment. The small crew of beer lovers that I was with had been at Bosc to Ekim’s Viking-themed tap take-over. Having already tried all of the Ekim beers previously, the rarity of a visit to Plenty took precedence. It’s not an understatement to say that it was heaving. Well over 150 people were there spilling out onto the footpath and cramming around Stone & Wood’s caravan/bar on wheels, Bonnie. The fact that Brad, Ross and Jamie were in attendance probably helped boost numbers. Keeping punters happy and fed was the iconic Bun Mobile. 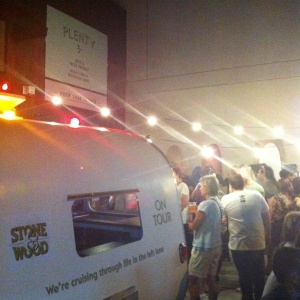 Highlights throughout the week…

The week kicked-off with an amazing industry breakfast at Tippler’s Tap that I’d snared an invite to. A posse of who’s who in Brisbane craft beer (plus me) under one roof was a lovely way to start the week. The food was sensational – as you’d expect at Tippler’s – and we had the pleasure of eating it alongside a glass or two of the Brewsvegas Beer (4.6%) – the first ever pouring of it.

The Scratch vs Tippler’s shenanigans. Both bars and their staff were at each others throats all week. All in jest of course. The last day of Brewsvegas saw this blog feature a joke post about Jim from Tippler’s Tap written 100% by The Scratch boys. Tippler’s retaliated by entirely shrink-wrapping a van at The Scratch which incited a Scratch-organised flash mob prank at Tippler’s. What scallywags.

I’ve mentioned the attendance above but a highlight for me was meeting newcomers to the craft beer scene. Brewsvegas has opened the eyes of non-believers for sure. 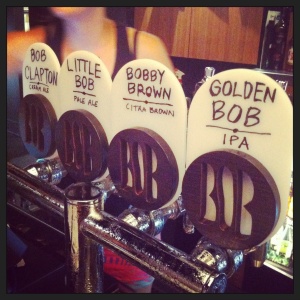 A major highlight was the amount of new beer flowing around town. For example, Bacchus Brewing Co. was responsible for brewing more than 50 different beers. Some under their own brand but many on behalf of clients. Stand-out contract brewed beers were the four by BOB (Brewski’s own Matt Emerson and Doppel Factory’s Adam Meisenhelter). The stand-out was Bob Clapton – a 5.8% cream ale. The delicate underlying vanilla made it a very tasty drop.

The IPA Jockey at Newstead was good fun. Twelves taps of IPA and a DJ spinning old school vinyl was not to be missed. 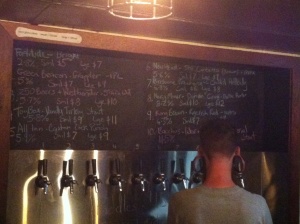 Tap number three all the way

I cannot pass the opportunity to commend the idea of the First Annual Brisbane Untappd event. Obviously, the only reason I’m saying this is because I assisted in brewing one of the beers for the evening! The Jaffa Wit (5.7%) – under the 250 Beers/Westbender banner – was a hit with the crowd and it missed out on the top prize by just one, solitary vote. Pipped at the post by Bacchus’ War & Peat (11.0%) – a superb Russian Imperial Stout.

Lowlights throughout the week…

Not seeing my kids much.

Slipping over in thongs (or flip-flops depending on your nationality) on a wet floor at Brewski during the MP vs MP event. Bruisevegas! 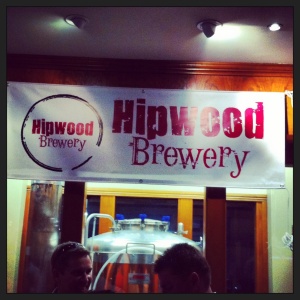 Despite the hurrah surrounding the launch of Hipwood Brewery at The International Hotel, I was quite let down by the new beers. They weren’t all that distant from the average previous offerings. Time will tell if they can pick up their game.

I seem to have made a name for myself with my knack of falling asleep on the train journey home from Brisbane. I have missed my stop on a number of occasions much to the amusement of some. Considering that 250 Beers HQ is 40 kilometres north of Brisbane it’s actually quite shit when it happens because stations are quite far apart. The day of the Holgate Brew School, I also attended Instagrammy Pre-Drinks with Brewcult at The Scratch, Get Flawed at Newstead as well as gate-crashing the Instagrammy Awards at Tippler’s Tap. It was a long, tiresome day. As I started to nod off on the train, a security guard patrolling the carriages asked me what stop I wanted. I told him and he said that he’d wake me up at my stop. My hero. I then fell asleep and he duly woke me. Off I stepped but it was the wrong station. It was the station before the one I wanted! It was the last train and it started to piss down with rain. It wasn’t just drizzle either – it absolutely hammered it down. I had to walk 3 kilometres in that weather with no umbrella. That guy went from hero to zero within a matter of minutes. Arsehole.

Anyway, that drenching didn’t dampen (get it?) my spirits. It was a fantastic week and a triumphant example of what can be achieved if the right people run the show. There were a number of winners during Brewsvegas namely those organisers but a big tip of the hat must be aimed at all of the venue owners and managers that made this happen.