I first met Wade Curtis almost a year ago. It was whilst we were both on board a bus full of revellers celebrating the birth of a new Queensland brewery. Almost 365 days later, Wade’s brewing company, 4 Hearts, has taken the huge step of bottling their pale ale for commercial release.

That day on the bus I recall Wade telling me to follow my dreams. This was sound advice from somebody that has kept his feet on the ground and proved that, with persistence, a vision can very much come to fruition.

After over 3 years since the first keg of 4 Hearts Pale Ale was sold craft beer lovers can now buy the beer in packaged beer.

Wade Curtis, owner of 4 Hearts Brewing said, “I’m super excited to finally see our Pale Ale in bottles and available for people to take home or for smaller bars or restaurants to be able to serve the beer without a tap system.

Since we launched this beer people have been asking – when will it be available in stubbies? Now they can”. 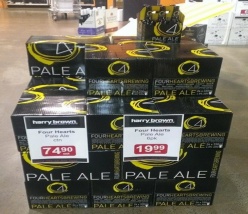 The bottled beer is currently on sale at Harry Brown, Yamanto and discussions are on track to have the beer available at other bottle-shops and bars in Ipswich, Brisbane, Sydney, Canberra, Melbourne and Adelaide.

The decision to finally bottle this beer has been a long process with many decisions to be made. The beer is made in partnership with Brewpack in NSW.

“I really wanted to produce the beer in QLD but it was just impossible to find a brewery that could accommodate our production and also do it at a price which meant we could offer it for sale to our customers at a reasonable price.”

Craft beer is the fastest growing beer category in Australia at the moment. Queensland brewers are under-represented in bottle-shops with only really Burleigh Brewing and Blue Sky being widely available.

Find out more by clicking here or by visiting the 4 Hearts Facebook page.