Wowsers. No less than 46 unique beers made my list in July. Double wowsers is that 38 of those were brewed in Australia – 17 of which hail from Queensland!

It’s no real surprise that the unique beer intake was high in July. Queensland Beer Week (and other semi-related events) came and went plus All Inn Brewing launched.

The eight non-Australian unique beers were as follows:

3 Monts (8.5%) from French Brasserie de Saint-Sylvestre which is an overpriced, over-hyped glorified lager with an elaborate get-your-pliers-to-open clamped cork. Perhaps it would cellar well? I’m not going to buy another to find out.

Three beers from New Zealand, two from 8 Wired; The 2011 Grand Cru (11.0%) was simply brilliant. It’s aged in pinot noir barrels and is well worth the price tag. The same thing can be said for Bumaye Imperial Stout (16.0%). This one became the beer with the highest alcohol content on my beer tally. You can read more about it here. The third kiwi brew is Monteith’s Barrel Aged Porter (6.5%). I’ve given up on Monteith’s now. Their recent IPA is not great and this porter is very lacklustre, watery and ‘nothingy’.

The first representative from Lebanon on my beer list is Gravity Brewing and their 961 range of beers (961 is the dialling code for Lebanon). I had the Pale Ale (6.3%) and Red Ale (5.5%). I can’t say that I’d rush back and get either again although I’m keen to try the others in the 961 range.

One appearance from my homeland in Meantime’s India Pale Ale

(7.4%). This is the only beer from Meantime that comes in a corked 750ml bottle. A special bottle for a wonderful IPA. I can’t help but fear that the fancy shmancy bottle and cork help drive the cost to the consumer up. The beer inside is worth it though.

Mission Brewery from the USA make up the final non-Aussie beer here with a 9.8% Russian Imperial Stout called Dark Seas. It tastes divine with the rich roasted malt and coffee you’d expect but it isn’t a patch on Sierra Nevada’s delectable Narwhal.

Ok, so that’s those out of the way. Here goes with the 38 Australian beers new to my beer tally in July (as usual, I’ll try to keep it brief)… 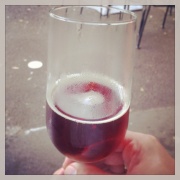 Brewing in July…the American Pie (4.2%) was delightfully just like tasting apple pie. It went down a treat at Cardigan Bar after traipsing around the Ein Bunpin Festival in Sandgate. Also quaffed at Cardigan (on their opening night) was Mosaic IPA (7.0%) and the now famous White Chocolate and Raspberry Pilsner (4.9%).

Steve ‘Hendo’ Henderson’s second bottled beer under his Brewcult label, Hop Zone Session IPA (5.0%), is exactly that – a fine, sessionable IPA that I’ll be into again for sure.

My first ever beer from Brewtal Brewers was consumed last month. The Bloody Good Stout was named simply because it’s a bloody good stout I presume. Why not?

A Bridge Road Brewers tap take-over at Archive on the eve of QLD Beer Week enabled me to get into four of their beers that I’d never experienced…an imperial pilsner named New Sydney Best Little Elixir (7.7%), The Junction NewPorter (6.0%), Victoria’s High Country Brewery Trail Tripel Rule 47 (8.5%) and B2 Bomber Mach 3.0 (8.2%). As you’d expect, all four are superb beers and it was a pleasure to slurp upon them in the presence of Mr Bridge Road himself, Ben Kraus.

Angsty Hopster Black Coffee IPA (6.0%) by Cavalier Brewing was a stand-out for me during Beer Week. As was The Chief IPA (6.3%) from Monk Brewery & Kitchen and the collaboration between Murray’s and The Crafty Pint which is a Russian Imperial Stout called Auld Bulgin’ Boysterous Bicep (10.0%) brewed with mussels, oysters and a Belgian Trappist yeast. It works and is an amazing stout!

During the week of beer in Brisbane I was introduced to the marketing manager of Matilda Bay Brewing, Jamie Fox. He shouted me a new Matilda Bay brew – an amber ale called Ruby Tuesday (4.7%) – on his tab. Thanks again Jamie.

The season has dictated the inclusion of two more imperial stouts. Feral’s latest Brewpub release – Boris (9.1%) – as well as Red Hill’s Imperial Stout (8.1%). Both were eagerly anticipated and I wasn’t let down by either. Bring on next winter! Another beer from Red Hill also found its way onto my beer tally. Their Wheat Beer (5.0%) is as good as I’ve tried in the style.

The latest annual Coopers vintage release (7.5%) also featured last month. I found it not to be as enjoyable as last years but worth a try nonetheless. I’ve cellared some for future enjoyment too.

Malt Shovel’s latest Hop Thief (the fifth in fact) under the James Squire banner was readily available in July. It’s an American Pale Ale featuring Citra and Centennial hops and was tasting extraordinarily fresh. I enjoyed this one a lot (literally!).

Hopfweizenbock (6.5%) finally made its way up to Queensland last

month. It’s a collaboration brew between Victoria’s Mountain Goat and Brooklyn Brewery from the US. Fellow Brisbane beer blogger, Nick (the Oz Beer Baron), was on hand during the brew. More on his exploits here.

To wrap up the epic month of July are three beers from Mornington Peninsula Brewery; Brown (5.0%), Imperial IPA (8.5%) and IPA (6.4%). I’m fast becoming a huge admirer of their beers. My beer tally contains six MP brews and every single one has been extremely classy. The Imperial Amber is one of my favourite Australian beers.