A new limited edition beer washed up on the east coast of Australia in the past week or so.

Jack Tar (9.5%) didn’t actually ‘wash up’ like something from a shipwreck. More than likely it arrived from Western Australia on the back of a crusty truck although in keeping with the nautical theme of Sail & Anchor, I figured ‘washed up’ sounded more appropriate.

Of course, being a limited edition beer I was sucked in straight away. I had to try it. I have to confess that the last Sail & Anchor beer to have passed my lips was their Dry Dock which I nicknamed ‘Dry Sock’ because it was just awful! It was tempting to refer to it as ‘Dry Cock’ because it really was bad but I didn’t want people to question how I knew what a dry cock tasted like. I really have no idea so I ran with ‘Dry Sock’.

Also, I am proud to say that I have still managed to avoid the four mainstream Sail & Anchor craft beers; Cat’s Shank Kolsch, Lark’s Foot Golden Ale, Boa’s Bind Amber Ale and Monkey’s Fist Pale Ale. I’ve not even been close to being tempted. I don’t agree with the whole ‘Woolworths attempting to muscle in on the Australian craft beer industry’ thing….even if the beer tastes half decent.

A limited edition imperial stout couldn’t be missed though.

Staying with the nautical theme, the blurb on the label informs us that Jack Tar is a sailor and that he would stick his hair and clothes with black tar to keep the sea at bay. What a dirty bastard! Imagine the look of horror on his wife’s face when he returns home from a voyage. Mrs 250 Beers would refuse to wash my clothes if I came home smeared in tar. Note the words ‘is a sailor’…this isn’t past tense. Jack isn’t some mysterious character. No, he is living in today’s modern society. Doesn’t he know that there are some pretty decent hair products available these days? 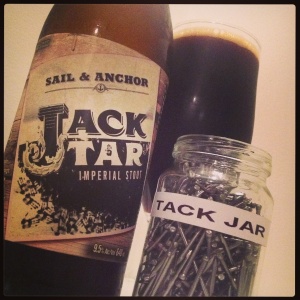 Back to the beer…it was ok. It was far from the Dry Dock awfulness but it didn’t float my boat in a mega way like I was hoping for (I couldn’t resist another nautical quip).

I’m not a connoisseur of imperial stouts but I’ve had a couple of crackers in the past to know that this one cannot be compared. It’s nowhere near as good as North Coast’s Old Rasputin (9.0%) and miles (nautical miles of course) away from Sierra Nevada’s Narwhal (10.2%) which is a mysterious sea creature.

Being a stout, the driving factor is of course the dark malt which I really enjoyed. There were definite hints of dark chocolate and coffee but I found the beer quite watery – a little bland with not much body to it. This is despite the tasting notes promising ‘creamy and smooth’.

I have to question the size of the bottle. It’s too big in my humble opinion. If, like me, you have zero chance of your partner wanting to share your beer, you might be in trouble. I was. I struggled to get through all 640ml. A smaller 355ml or 330ml would have been sufficient.

With big bottles there are big price tags. Expect to pay around $12 for a single bottle. Being heavily funded by Woolworths, Sail & Anchor will have this into Dan Murphy’s and BWS soon if not already.

Don’t be fooled by the term ‘limited edition’. Just because it might be a one-off doesn’t mean they didn’t brew shit-loads of it. It’ll be around for a while I’d imagine. My advice? Hold fire until the price comes down a bit. I’d be happier paying around $8 for 640ml of this one.